Variation in Uncomfortable Loudness Levels (ULLs) across frequency: A marker of misophonia and severe hyperacusis

Across-frequency variations in Uncomfortable Loudness Levels (ULLs) have not been fully explored in audiology literature. Most researchers reported that ULLs averaged across participants did not change markedly across the frequency range (Formby et al. 2007; Meeus et al. 2010; Sheldrake et al. 2015). However, they did not report the ULL variations across frequency for individual patients.

Dr. Aazh’s tinnitus team and their international collaborators conducted a pioneering study analysing the data for over 900 patients in order to explore the pattern of ULLs among patients with tinnitus and hyperacusis. They assessed the “slope of the ULL thresholds” by calculating the mean differences in ULLs between 8 and 0.25 kHz (i.e., ULL at 8 kHz minus ULL at 0.25 kHz). Their study showed that there was a significant correlation between the slope of the ULLs (difference between ULL at 8 kHz and 0.25 kHz) and ULLmin (Average ULL across 0.25, 0.5, 1, 2, 4 and 8 kHz for the ear with the lower average ULL) (r=0.3, p<0.001). There was a significant negative correlation between the slope of the ULLs (8 – 0.25 kHz) and the scores on Hyperacusis Questionnaire (HQ) (r=-0.13, p=0.001). In the other words, patients with steeper ULLs (larger differences in ULLs thresholds between 0.25 and 8 kHz) had lower average ULLs in their worse ears and greater hyperacusis handicap. 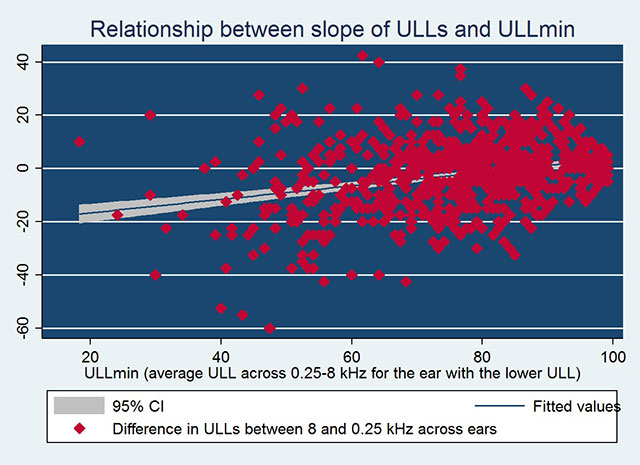 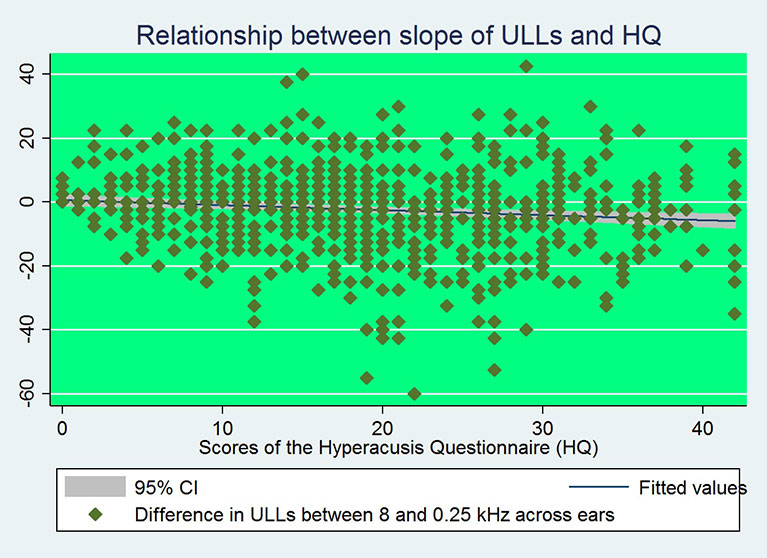 This study, for the first time, highlights that server hyperacusis and greater hyperacusis handicap is characterized by strong across-frequency variations in ULL.

The strong across-frequency variations in ULLs for our patients is an indication of adverse reactions only to specific sounds, which is consistent with the definitions of annoyance and fear hyperacusis (Tyler et al. 2014) and misophonia (Cavanna & Seri 2015; Kumar et al. 2017; Jastreboff & Jastreboff 2014).